Date A Live Twin Edition: Rio Reincarnation (デート・ア・ライブ Twin Edition 凜緒リンカーネイション, Dēto A Raibu Tsuin Edishon Rio Rinkāneishon?) is a game produced by Compile Heart and Sting Entertainment. This game is a sequel for the two games which were first released on PS3, Rinne Utopia and Arusu Install. It was released on July 30, 2015.

This game features a new original story, together with a new original game character named Rio (凜緒?), who is voiced by Ayane Sakura. The route for Marina Arusu is confirmed through an interview with Suzuko Mimori, the voice actress for Maria and Marina.

On 20th June 2017, an issue of Dengeki PlayStation revealed that all three previously released Date A Live games will be compiled together as Date A Live: Rio Reincarnation HD, and will be ported to PS4. The collection also includes the novels and drama CDs originally packaged as bonuses for each game.

A Western release of Date A Live: Rio Reincarnation has been confirmed.

The Date A Live series that was released on PlayStation®3 becomes one!

Rinne Utopia and Arusu Install which were originally released on PlayStation®3 will be released as a single PlayStation®Vita software. New features will be added to the original systems that include moving characters and events CG!

"Rio Reincarnation" is the subsequent story of "Arusu Install". Even without clearing the Rinne Utopia and Arusu Install, you will be able to play it by clearing the "Digest" which will introduce the events from the beginning up to Arusu Install. The "Digest" can be selected at the start of the game, and then, it proceed with the narration of Shido, who is the protagonist.

※For new players, it is recommended to clear "Rinne Utopia" and "Arusu Install" games before playing the new content.

When the game keeps advancing, the map picture will appear. By selecting the icon of any character that displayed on the map, it is possible to look at the event of that character in question. There are two maps exists in the game, [Town Map] and [Raizen High School Map]. Go back and forth in the two maps and searches for the heroine you would like to invite for a date.

Upon being awakened, Shido found himself in a world where Arusu Maria exist, who does not have a physical body in reality.
And then, a certain girl appeared before Shido.

Sonogami Rinne ―― At one time, a girl that Shido had failed to save.

Shido, who regained the memories of when he had known, becomes possible to investigate the cause of the resurgence of .

In the midst of it, who appeared before Shido was, a young girl whose appearance resembles that of <Ruler> ―― Rio.

「It's no good if you don't find the most important thing to you.」

What does Rio means by "the most important thing"?
Is she an existence related to ?

In this closed world, the action should Shido take in order to regain the everyday life is only one ――

By dating and make them fall in love!?

Shido Itsuka
The protagonist of this game.
CV: Nobunaga Shimazaki (During the Digest Only)

The second-year student who attends Raizen High School. His family consists of father and mother, along with his step-sister Kotori but, the parents are often away from home due to their work. He is an ordinary student at school, and an ordinary brother at home. He is also a good cook.

When the affection points between a Spirit is high enough ―― He will have to kiss her. Through it, he is able to seal its power.

Identification name, "Princess". Spirit ―― A mysterious existence that comes from the bordering dimension and exists in this world. Everything such as birth, ecology, and its purpose is unknown. It has the overwhelming power to your knowledge, violent, and even beauty that can be said only.

Her power is currently sealed by Itsuka Shido and has become one of the Raizen High School students.

Itsuka Shido's classmate. A talented girl who is also a Raizen High's genius, and combined with a mysterious beauty. She is shown to know Shido from the past.

In addition, for the sake of the Shido and her purpose, she is willing to take an action herself by disegarding the order from above.

Identification name, "Hermit". She is an extremely gentle spirit up to date . However, she hides a tremendous force that cannot be imagined from a figure of a young girl.

Identification name, "Nightmare". The spirit which is feared for depriving the lives of humans. Unlike "Princess" and "Hermit", she has a clear purpose and twisted actions.

She has been severly wounded when Kotori shoot her with her spirit power and dissapeared, but...

Ribbon is the trademark for Shido's younger sister. Innocent skirmish and quarrel don't die out but, the basic relation is good. She always love her brother and the "Deluxe Kid's Plate" so much. She also has a reverse side as she is the commander of <Ratatoskr>.

In addition to this, she also has the power of a spirit despite being a human. In that case, her identification name is "Efreet".

A new character for the original PS3 game, Date A Live: Rinne Utopia. The childhood friend who appeared in front of Shido. A gentle girl who takes care of Shido diligently. She lives next to the Itsuka residence and for Shido and Kotori, her existence is like another family.

Identification name, "Berserk". The twin spirit who has the power enough to cause a tornado by simply moving around, Yamai's half. She has the personality that is easy to get in the swing, along with a determined expression and always uses difficult words ―― a characteristic like the so-called chuunibyou.

Identification name, "Berserk". The twin spirit who has the power enough to cause a tornado by simply moving around, Yamai's half. In comparison to Kaguya, Yuzuru has a rather calm personality, and a characteristic behavior that always puts 2-letter Kanji in front of every phrase she wants to say.

Identification name, "Diva". The spirit who has the power to fascinate the opponent just by hearing the song. She is a man-hater and has the tendency to become attracted by girls. Miku attends the Rindouji All-Girls Private School and also play an active part as an idol.

A new character for the original PS3 game, Date A Live: Arusu Install. A mysterious girl who suddenly appeared before Shido in the virtual world. It designates to collect the information concerning "love” at first. She is the type who want to continue experiencing something she doesn't know, and will immediately learns various things.

A new character for the original PS3 game, Date A Live: Arusu Install. The girl who looks just like Maria whom suddenly appeared before Shido in the virtual world. She always appears when the day comes to an end, and teases Shido. She seems to know about the trouble of the virtual world and shows the manner of expecting Shido.

A new character in the PlayStation Vita game, Date A Live Twin Edition: Rio Reincarnation. A young girl that appeared in front of Shido in <Eden>. She has an innocent and friendly personality with an appearance that matches her age. Her appearance resembles the previous ruler of <Eden>―<Ruler> a lot though...

Reine is highly intelligent and the Analysis Officer of Ratatoskr's Fraxinus Crew. She transferred to Raizen High School as a Physics teacher and an assistant home-room teacher at Shido's class. Beautiful and intelligent, her only flaw is being sleep deprived, since she doesn't seem to sleep much. At some point of time she can be reliable and take command of the directions which Shido needs to do when dating a spirit.

Mana Takamiya
The side character of this game.
CV: Misato

Mikie Okamine
The side character of this game.
CV: Kanami Satou 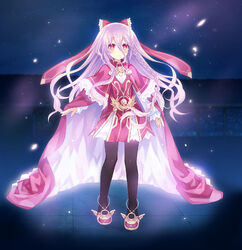 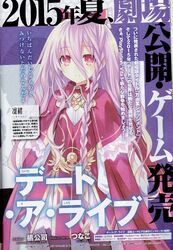 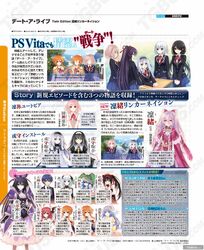 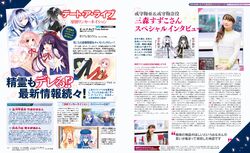 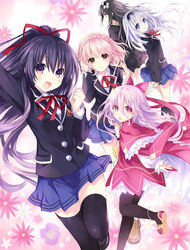 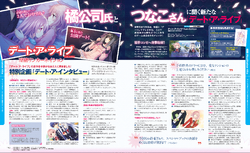