Date A Live: Rinne Utopia (デート・ア・ライブ凜祢ユートピア, Dēto A Raibu Rinne Yūtopia?) is a game produced by Compile Heart and Sting Entertainment. It was released on June 27, 2013.

Spring. Shido Itsuka encountered a spirit for the first time and rescued that girl.
Since then, Spirits will frequently appear before him.
With the cooperation of <Ratatoskr> which aims to interact with the spirits, Shido continues to struggle trying to save the girls.

Early summer. The uniform became the summer clothes, and paused for a while.
The Tengu City was confined in a huge barrier that suddenly occurred.
Let alone that, the communication with the outside was much less getting away.

The Spirits went out of control ― own poor physical condition ―
At the same time when the occurrence of the barrier, one after another trouble hit Shido.

Rinne Sonogami ― adapts herself to the daily life of Shido Itsuka as his childhood friend.

In order to stop the spirits whose power does not stabilize, solving the puzzle and the problem, the action should Shido take in order to regain the everyday life is only one ――

Date the “girls” who destroy the world, and make them fall for you!?

A second-year student who attends the Tengu City's Raizen High School. Even though his family consists of father and mother, along with his step-sister, Kotori, his parents are often away from home due to their work. He is an ordinary student at school and an ordinary brother at home. He is also a good cook.

Codenamed “Princess”. Spirit ―― A mysterious existence that comes from bordering dimension and currently exist in this world. Everything such as birth, ecology, and its purpose is unknown. The only things known about her are: she has an overwhelming power, is said to be violent, and beautiful.

Shido Itsuka's classmate. Raizen High's best genius and is athletic, a talented girl combined with a mysterious beauty. She is shown to know Shido from the past.

Codenamed “Hermit”. An extremely gentle Spirit. However, she conceals a dreadful power that cannot be imagined from a figure of a young girl.

Codenamed “Nightmare”. The Spirit who is feared for depriving the lives of humans. Unlike “Princess” and “Hermit”, she has a clear purpose, though, her action seen here and there are.....

Her ribbon is the trademark for Shido's younger sister. Innocent skirmish and quarrels don't cease, but the fundamental relationship between the siblings is good. She absolutely loves her brother and the children lunch called “Deluxe Kid's Plate”. She also has an opposite side of the face for being the commander of <Ratatoskr>.

A new character in the PS3 game, Date A Live: Rinne Utopia. A childhood friend who appeared before Shido. A gentle girl who takes care of Shido diligently.

The Analysis Officer of <Ratatoskr>'s airship, <Fraxinus>. She seems to constantly have insomnia and also has a sleepy face. She has a pretty strange behavior, although in terms of working as an analysis officer is very excellent. Concurrently, she is also the assistant homeroom teacher at Shido's class. 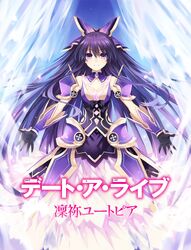