Date A Live: Ren Dystopia (デート・ア・ライブ蓮ディストピア, Dēto A Raibu: Ren Disutopia?) is a game produced by Compile Heart and Sting Entertainment and is scheduled for release in Japan in 2020.

This game features a new original story, together with a new original game character named Ren (蓮?). The seventh Spirit, Natsumi, is also confirmed to appear in the game.

A night spent with everyone, uneventful and as always.
Shido has a strange dream. In the darkness, he hears someone’s voice.

When he wakes up in the morning, he sees a strange box engraved with a design of a snake placed at his bedside.

Wondering if whether this is somebody’s mischief, Shido checks with everyone.
Then when he opens the box—. 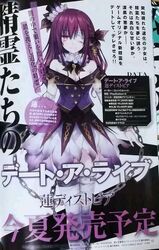 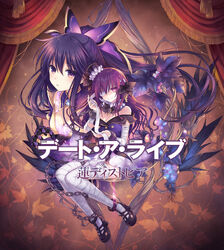 Retrieved from "https://date-a-live.fandom.com/wiki/Date_A_Live:_Ren_Dystopia?oldid=114250"
Community content is available under CC-BY-SA unless otherwise noted.